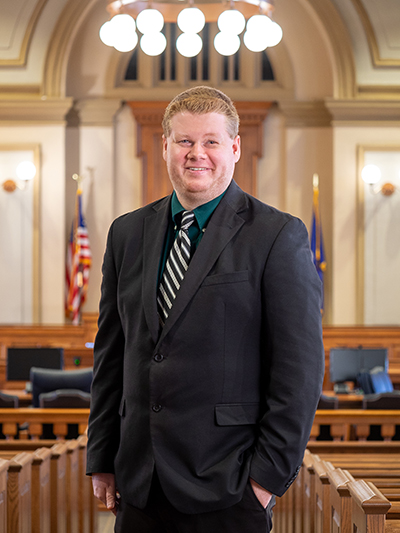 Steve D. Dluzneski focuses his practice on civil and probate litigation, estate planning, and estate administration. Steve takes a hands-on approach to every matter that he handles, and he prides himself on being a knowledgeable, diligent, and result-oriented attorney who aggressively represents his clients’ interests. In the litigation arena, this means that Steve personally oversees each case from start to finish and strongly advocates for his client’s position with the opposing party or the opposing party’s counsel. Steve’s primary objective in every litigation matter is to ensure that his client’s legal rights are safeguarded and that each client receives high quality legal representation.

Prior to joining Charles S. Bradford, P.A. as an associate attorney in January 2017, Steve graduated from Wake Forest University with a bachelor’s degree in biology, then earned his law degree, magna cum laude, from the Charlotte School of Law. During his law school career, Steve was active in both the law school and Greater Charlotte-Mecklenburg communities, participating in various clinical and extracurricular endeavors. Most notably, Steve served as a judicial extern in the Chambers of Chief United States District Judge Frank D. Whitney of the United States District Court for the Western District of North Carolina. In this role, Steve gained invaluable, behind the scenes exposure to the federal court system.

Additionally, Steve is highly proficient in Spanish, and he received an “Advanced” rating on a Spanish Oral Proficiency Test administered by the University of South Carolina in October 2015. Steve uses his Spanish proficiency to assist the Spanish-speaking clients of Charles S. Bradford, P.A.

In January of 2019, Steve became a member of the NAMI Mid-Carolina Board of Directors, in which he provides legal advice and guidance to the Board.

We are dedicated to serving our clients by providing legal wisdom, good sense, a friendly exchange, and expediency.

DISCLAIMER: Any information posted on the Charles S. Bradford, P.A. website (www.csblawfirm.com) is intended only to be representative of the firm's practice. These examples are not intended to, and cannot be relied upon, to predict the results in any other case. Information or interaction on this site should not be construed as establishing a client-attorney relationship or as legal advice. For advice about your specific situation, please consult one of our attorneys.
Photo by Image Source Group - www.imagesourcegroup.com